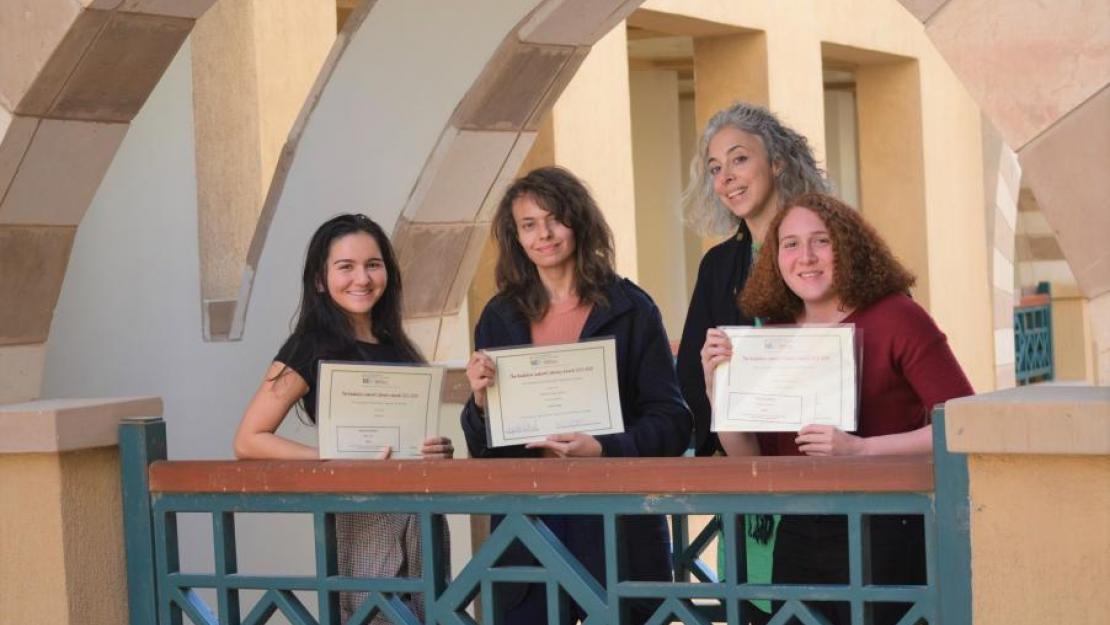 The Madalyn Lamont Award is an annual literary celebration in honor of Madalyn Lamont, former instructor at AUC, poet, and women’s rights advocate. This year’s Award Ceremony was held on March 5, 2020. The award, sponsored by the Department of English and Comparative Literature (ECLT), recognized three winners for their creative writing submissions in English.

Submissions for the award included prose, poetry, and drama. Noor Naga, member of the jury for the award, author of the novel-in-verse Washes, Prays (2020), and AUC Instructor, said the following about this year’s submissions: “I was stunned by the quality of all the contest submissions, but especially the prose pieces, many of which demonstrated a nuance and sophistication that far exceeds the students’ years. I can’t wait to see what they produce in time!”

First place winner Reham Taher Emam is a graduate student in Digital Journalism. Her piece “Memories of a Drowned Whale” takes place in Sarajevo: “I was trying to explore the imaginary settings of the city of Sarajevo and blend the true war events with my fictitious ones.” Reham is also an accomplished filmmaker, and says of her writing: “I like to explore new imaginary lives and put myself in the shoes of my characters to see with their eyes.” This is her second prize for writing. She previously won a prize in the GSA creative arts competition for her story “Holstein.”

ECLT graduate student Nina Lee won second prize with her short fiction piece “Bite.” Nina “wanted to evoke feelings of helplessness and insecurity and desire for control” in her story, one “about a wife’s disgust with her husband and her mundane life.”  Since Nina is pursuing an MA in Comparative Literature, she said she focuses a lot on writing in her studies at AUC. This is Nina’s third award for writing, for which she is “honored and humbled.”

Third place winner Ghalia Taman is a an undergraduate in her final year at AUC, majoring in Psychology with a minor in Writing. She describes her short fiction piece “Dinner” as “an autobiographical fiction about a teenage rich Saudi girl who is gender non-conforming and constantly tries to express who she is and be herself despite the resistance of her strict, domineering father.” Ghalia wanted to “create something unconventional”, and the award gave her “the push I needed to continue writing more stories.” This was the first time she entered a writing competition.

Every year ECLT invites an influential woman to speak at the award ceremony. This year’s invitee, economist and writer Maysoon Malak, delivered an evocative lecture on the late Iraqi poet Nazik al-Mala’ika: “Glimpses of Nazik al-Mala’ika: A revolutionary poet remembered by her cousin.” Malak moved from Iraq to Egypt with her daughters in 1980. Her work with the UN has brought her around the world, where she has trained UN staff on cultural sensitivity skills. The audience was a mix of those familiar with Nazik Al-Mala’ika’s work, and those being introduced to her for the first time, and Malak’s lecture was followed by a lively Q&A.

Doris Shoukri, professor of English and comparative literature at AUC